Recently I’ve been reading a book about Kandinsky. I went to an Impressionist exhibit with my fiancé in Philadelphia. I had forgotten, maybe, how good paintings could be- I left in a weird state of altered consciousness. I felt kind of elated, melancholy, and discouraged. I realized that the paintings I was enjoying I would never see again. Even if I saw them, I would never see them as the same person- the person I would be in twenty years would be full of wildly different thoughts and ideas. I would never see them as I saw them again. Mixed with this was the understanding that I was much farther away than I thought from being where I wanted to be. My friend Eric from work, a photographer, showed me a video by Ira Glass, called the gap (https://vimeo.com/85040589), and consequently I’ve been very much giving myself space to be an average painter. Seeing those paintings, though, really threw off my feeling of momentum.

I think I’ve been thinking too much in respect to what the Impressionists were doing. My paintings, especially now, remain a weird hybrid of comic book art, Warhammer modeling techniques, pieces of inherited vision from my Dad, and memories of great paintings. For instance:  My friend Greg says that almost all of my paintings look a little Mike Mignola: 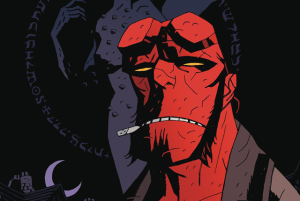 And it was validated to me by one of my other friends that my new portraits might have to do with something by Cezanne at the Carnegie: 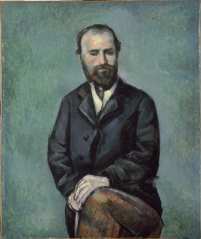 So, to get my mind off of the terror of my slow progress, I’ve been looking at something completely different. Kandinsky, who is mainly an abstract painter, made things that I find really fascinating. I think about them when I’m not looking at them, which is more than I can say about any other abstract painter whose work I’ve ever seen. Mainly, I find myself having a hard time thinking about abstract paintings I’m looking at, much less remembering them when they’re not around.

This is his painting of Moscow, which still has discernible objects, but is painted in such a way that you can see where his abstract understandings of painting influenced his style:

I think that what I like about Kandinsky is his color theory. Kandinsky really believed that colors had inherent, scientific meaning. He thought that blue had connection to tones in music, ranging from the sound of a flute (light blue) to the sound of a double base (deep deep blue). I love the movement in his paintings, the sort of soft almost-ness of them, where you can see parts and hopes of objects, but not necessarily identify anything specific. I feel like his abstract paintings (mostly his early ones, though) feel finished in a way I’m just not trying to understand. Reading and learning is helping me to focus. More paintings soon, I hope.