Hey friends, I’m back on facebook, but stuck in the middle of one of the most complex paintings I’ve ever tried t0 do. I thought I would share my progress. 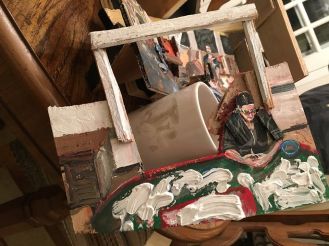 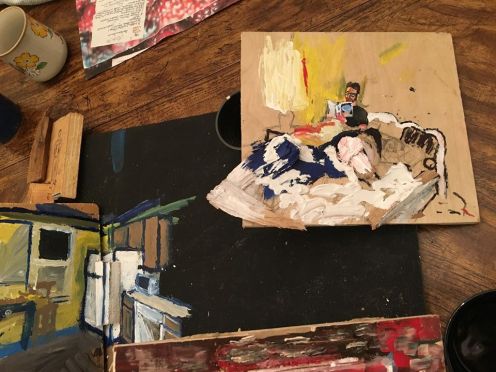 The people who see me in person all the time know that I’m trying to paint too of my friends, Jess and Eric. These pictures were taken at their house, on their table. The paintings in the pictures were made from pictures I took of their life and home. While it might seem like I’m purposefully being meta with taking pictures of their paintings of the pictures of their home in their home, it mostly came down to laziness. Eric took these pictures- I wanted them to see the paintings because the insecure part of me was worried that they would get sick of me following them around wit ha camera if there weren’t worthwhile results.

This painting is actually a culmination of a bunch of different ideas for me. Formally, the goal is to build momentum in the painting through using 3d structure in conjunction with 3d illusion. I want to facilitate an energy in the painting that would be impossible for just one style of painting to achieve. The goal of that is that I want the figures, though doing normal domestic activities, to be filled with a mysterious life. One of my favorite authors, Roberto Bolano, creates a power in his fiction by generating a undercurrent of impossible ominous force. What I would like to do is create an undercurrent of choppy, rhythmic energy that will be a baseline for the subject that goes over top of it. This also is the next step of what was happening with “Jeff in the Kitchen” (title subject to change…cough…abandonment) in that its figures in domestic scenes with a strong amount of yellow and blue hanging around. With colors, I’ve been sticking a lot to primaries. At some point I’m hoping to find some strange color, like Van Gogh did, that I’ll fall in love with and use all the time in surprising ways. Until then, I’m just thumping it out with major chords like red, yellow, and blue.

So, those are some thoughts. Sorry (not sorry) for being MIA on facebook…everyone getting upset about stuff all the time was bumming me out. I’ll be using facebook only on weekends from now on, Christina has my password and will be signing me out on Sunday nights.

Additionally, if anyone wants to see many of my mostly old paintings in the library- YOU CAN! I’ll be hanging up my paintings at the Squirrel Hill Library this Tuesday. Check it out! There will be a comment book.