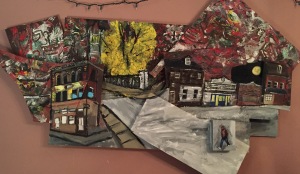 I’m not sure what to write about this painting, because I like it so much. Over the last two years, I’ve responded to finished paintings by immediately moving on from them to knew paintings I wanted to work on. While that’s a pretty efficient strategy, it skips the stage where I enjoy having made something. This Garfield painting feels like the painting I’ve been pushing myself to get to.

I put myself in this painting, which might be narcissism-light, as the person doesn’t really need to be at all. If you didn’t know I wear that same outfit every single day of my life, then you wouldn’t even know it was me. I intentionally made the path of the walker opposite of the flow of the street, to increase the sort of fantasy-esque qualities of the piece. The figure is sort of the third level out, coming out like six inches from the back. The mid level is the buildings, with the sky/mysterious figures as the backdrop. One reading that I would be excited for people to arrive at for this painting is that the figure is to some degree imagining the scene in its completeness from a different place entirely.

I’ve included two pictures from the walk that Will Penman and I went on one night through Garfield when I was thinking about doing this painting. I’m not sure if they are helpful/interesting, but I’ve realized recently that there’s a ton of content that I’ve never included on this site. For visitors who want to know about the paintings and process I’ve been using (basically, why else would anyone come to this site?), not including cool stuff I’ve done or found is sort of a stupid plan I think.

I think this painting comes from the conflicting feelings I’ve had living in Garfield this year. Though I live here, I’m not really part of this community in a real way. It’s a backdrop to the life I had before moving here, a set piece more than a driver of my engagement with community and life. I’m not satisfied with that, but I haven’t been sure what to do in response. That ambivalence I think was the combustion engine that made this painting happen.