Recently I turned 31- which, honestly, was no big deal. Until I realized that I left Harrisburg- wait for it- seven years ago.

Now, some of you, the ones that don’t live in my head and know my thoughts, might not realize how important Harrisburg was. It was only two years of my life. I hadn’t started being a social worker. Hadn’t met Christina. Most of the things that define my life now have (…..maybe) nothing (?) to do with having lived in Harrisburg.

Harrisburg looms large, though. And one of the places it looms largest is in my paintings. After London, which will probably get its own post someday, Harrisburg was the next major step in me developing confidence as a painter.

Here’s something I think about every day:

I think it’s safe to say that spending four years getting a history degree and then graduating to a Starbucks Drive Thru, mid recession, helped me to reasses some of my assumptions.

And, when I say I think about it every day…I’m not sure that’s an exaggeration. I remember when I would drive to work in the winter with my noise making station wagon at four in the morning, I’d have these waves of panic. I think they might have been minor panic attacks, but I’m not one hundred percent sure what they were. I think about those commutes when I go to work in the morning now, and how I like my job and have a car that runs and enough money in the bank to repair it (twice, most often) if it were to start having problems.

A lot of joy came from working at Starbucks. My manager took a chance on hiring me, and then he admitted later, not firing me after my slow learning curve. One of the shift managers really took care of me, and everybody else in the store, by humanizing the day with his storytelling. I think it reframed who I thought I was from somebody who had a lot of identity in ideas and thinking to someone who started to care more about what I could accomplish in real life.

Another thing, this was the first time I ever lived in a city. I thought Harrisburg looked amazing. I still think so, but it’s different. I realized that when I first moved to Pittsburgh, the newness of the landscape helped me to think of it as art in way that’s hard to do after living in a place for a while. Here’s some of the pictures I took when I was living in Harrisburg: 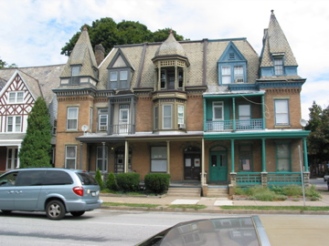 (I had an eye for blurry photography)

And here’s some of the first paintings I made about them: 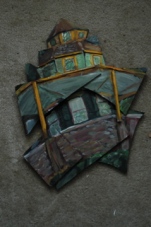 I think painting became more of a thing because I had more control over painting than I had over anything else. I started listening to a lot of self-produced rap. I felt it was analagous- one person, making the coolest thing they can. I was staying briefly in a for-sale house (again) with Greg when I realized I could make a portrait of a building with leftover dragon wood scraps. The third picture was the first one I made- I still don’t know how I got such vivid 3d effect on it- it’s still one of my favorite things I’ve ever done.

That power though, to make something cool, when a lot of the rest of my life was sort of overwhelming, was a way of fighting back against the feeling I wasn’t making it.

It’s weird looking back. I tried to help start a church, which in some senses didn’t go very well. Since then I’ve done all sorts of things spiritually. Gone to a church plant, led a small group, started a team that created a huge mural, volunteered at a foodbank for a year and some. Weirdly, I still feel like I’m under the shadow of  the young 20s commitment I had in Harrisburg, before bailing.

Harrisburg was a time of a lot of raw joy. Tough stuff, but a lot of experiences that helped me grow in a good way. Would I have been good at painting if not for the architecture of Harrisburg inspiring me? What if my church hadn’t supported me by paying my rent? What if my friends hadn’t celebrated me painting and encouraged me? Would I have leaned so hard into art and gotten so consistent if I had had a better job?

Harrisburg feels like yesterday, and it was seven years ago.