It happened about 3 weeks ago, and I’m still feeling the lift of having meaningful validation.

I won for a piece I put in my guild’s show- Pittsburgh Society of Artists. It was a juried show so the person who decided I had won was the owner of Boxheart gallery, which is one of the coolest galleries in Pittsburgh. 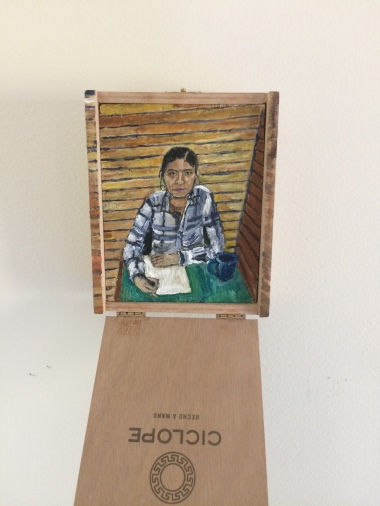 To briefly describe what this painting is about, I wanted to make a painting that reacted to people looking at it. You see a tiny box from across the room, you approach to see what’s going on, you notice you can open it, and then the interior notices you. It simulates and highlights the simple power of making eye contact with someone. One of my favorite parts of the piece is the angle of the far right wall in the opened box. Its angles down in an illusory way that I think really makes the interior work as a composition.

It’s honestly strange to feel like my art has had some measure of meaningful success in the art world. You know how many times I edited that last sentence cause it felt worded incorrectly? (It’s five) I’ve spent so much time in garages and basements making this stuff, tooling around with and repurposing ideas.

The best analogy I can come up with is pretty nerdy. When I was in high school, I used to buy this crazy expensive fantasy model army game. Did I know anyone else who played? Mostly no. What I would do, then, is hang out in my bedroom and paint all these figures I never really got to use and think about the games I would play someday. Crazy concoctions, scheming about ways to get more money to buy more goblin soldiers. I would read magazines and look at how people out there painted their guys and the tactics they used to win. Then I would do my math homework and go to bed. Eventually I stopped playing because after four, five ish years I guess I gave up on the idea that I would be in some epic tournament.

Winning this award is like winning one of those imaginary games. I’ve gotten so used to thinking that all this is playing pretend that winning something is surreal.

So, I feel great. I think it’s built in me some additional trust in my process. Some more confidence. I’m excited about the next wave of paintings.

One thought on “Guess what? I won an award!”