I have an art show right now at the Wexford Pub in Whole Foods. It’s up at a gallery for two months- check it out. Should be up for six more weeks.

I’m still making Angels over Taco Bell, and I’ve been traveling and parenting as well. Art has slowed to a crawl, unfortunately. Hopefully I’ll be able to power out a couple hours over the next few days.

I’ve been listening to a podcast called “The Savvy Painter”. Artists discuss their process and their difficulties with painting. Since then, I’ve been thinking about my art process, particularly in light of having a few days without painting while going to Philadelphia.

One of the things that came up was the questions of painting something just because it was beautiful vs. constructing paintings because you had something specific to say. In the past I’ve chaffed against needing to say something- I’ve been frustrated at the idea that a spoken statement could adequately summarize an alternative communication. If I were to tell you what Miles Davis’ “Move” album was about in a simple sentence, would it communicate any meaningful truth about experiencing the album? Are movies that same as their plot summaries? If not, then saying that a piece of art should have a stated meaning is ultimately a pretty silly exercise.

On the other hand, recently I’ve been making paintings that aren’t a parrot, or a house, or a flower, or a pirate. They’re not even just portrait or a landscape. They’re mixes of imaginary and real- scenes depicting semi-surrealistic events. Some of that has been driven by my wanting to say something autobiographical while wrestling with being 30 something.

Another thing I’ve been thinking about is whether I am casting a vision now vs. letting a paiting grow in its own directions. I’ve always used pictures I’ve taken for paintings, but inside of that structure I’ve allowed a painting to become its own thing and follow its own internal logic. I’ve never tried to paint something photrealistic- I want to allow instinct to drive the process forward.

(Above is a photo I took in Philadelphia- cool nature/building potential for a painting.)

More and more though, I can control what things look like because I’ve gotten better at making art. I can think in my head about what I want to see happen, and then I can make it happen. I still have to hold things loosely- I have a wide swinging margin for happy error still. I have a decision to make though, now, about what process experiments I want to do in order to alter the final outcome of my paintings.

I’ve recently wanted to start paintings with crayon rubbings from my ceiling. It’s a idea that’s been floating around for a while, not going anywhere. It would be a way of doing something completely different and lead to some hopfully new conclusions about where my painting could go. I don’t want to do that yet, though, because I need to keep pushing forward for this art show in 2021.

Lastly, here is a weird cat dragon mural I saw in Philadelphia: 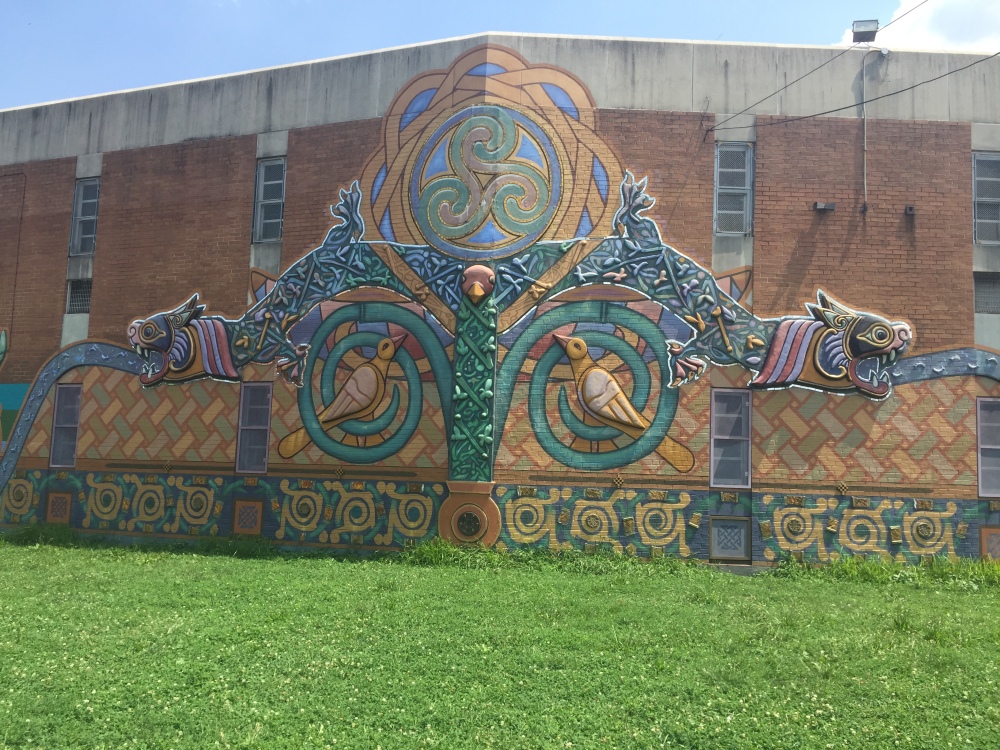