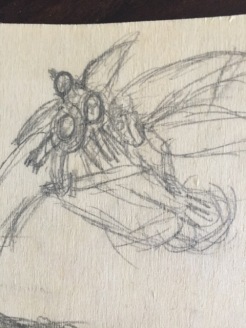 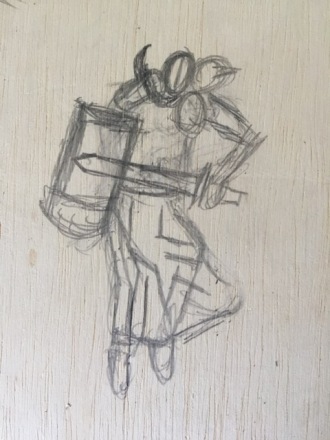 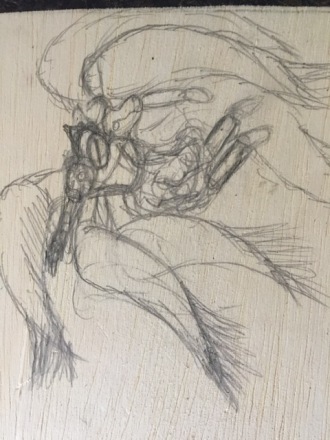 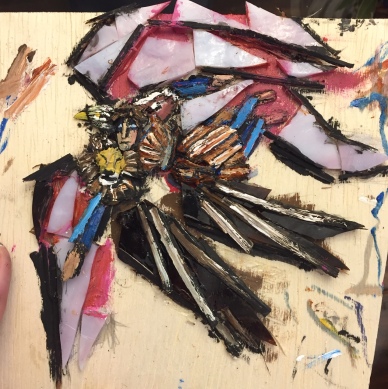 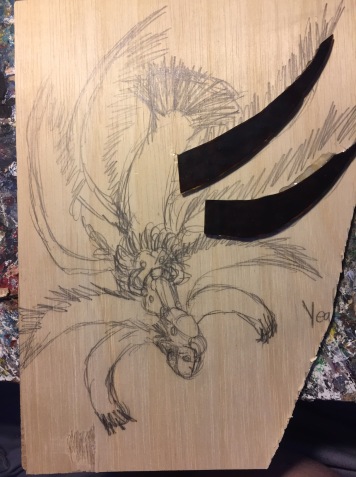 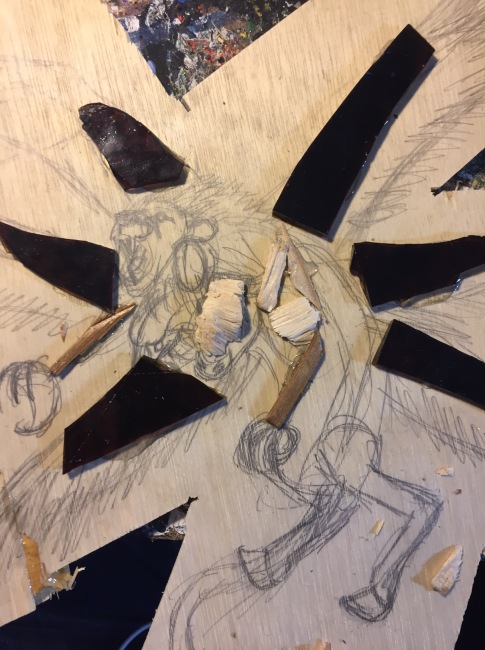 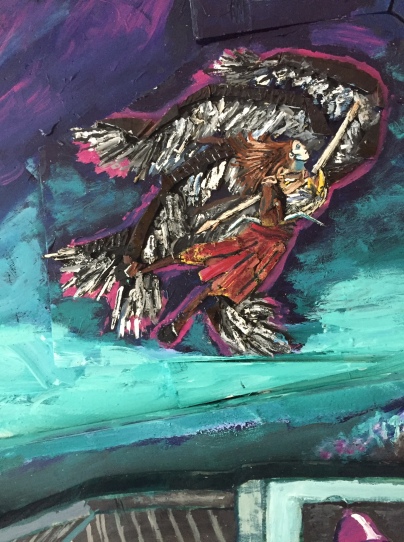 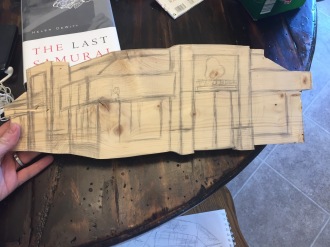 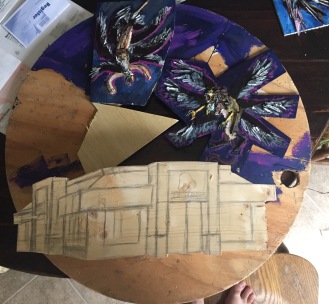 (Editors Note: I wrote all this before I finished. Above I’m placing the whole, long, quixotic journey of this very particular painting)

I’ve been working on Angels over Taco Bell since one week after Starbucks Astronaut. When I started I didn’t imagine that this would be such a long, involved process. I’m writing this before I’m finished- I can’t wait to be done.

Problems as of writing this: The perspective doesn’t make sense yet. Is the field in front of Taco bell doing anything? Will the light post do anything to make it an engaging piece?

I might also have eto go back and texture taco bell- guess we’ll find out- I wanted to make the angels seem like they were on a different plane then the world around them. I’m a little worried I did too good a job.

I made this painting to talk about the strange mix of affirmation and anxiety in believing in a spiritual world. Fast food, which is bad for your body and probably also bad for society, is best enjoyed nihilistically, I think. One of the strangest things about being an adult is that you don’t have people weighing in on how worthwhile your decisions are. You just…do things. Believing in a spiritual world, on the other hand, gives you a backdrop of meaning and purpose that touches the mundane pretty deeply.

But what does spirituality have to do in particular with everyday decisions? How does God feel about fast food? How do I map going through the drive through onto an epic, cosmic struggle between the forces of light and the forces of absence of light (in Augustine’s formulation).

This is the 3rd portrait of myself as as a small, insignificant figure in a bewildering world. I’ve thought about making a larger portrait, but I’ve never wanted my paintings to be about self aggrandizement. (Which, is why the first two paintings have me with a hood up) The reason I put myself in paintings is to anchor them in personal context. It’s somewhat autobiographical, but I also hope to be a stand in for the viewer. I don’t want people to look and say “Oh isn’t that interesting about Nathan” but “Oh isn’t that interesting in general- look, there’s a person like me in that strange place”. I’ve played with having other people- and in the future I might have other people be the protagonist of my surreal ideas, but I’ve worried about projection.  Since I’m not trying to do a painting where I imagine that persons life, I feel weird taking them and sticking them into a world that’s about me and things I believe and imagine.

I wonder when I look at other people’s self portraits what the intent was. Was the painter painting out of self discovery? Is the painting freighted with imperceivable personal subtext? I hope that many painters are painting generously and self effacingly. Narcicissm is a pretty immediate dead end.

Anyway, (writing this as of today) this painting is done, finally. It’s certainly very big- It’s not as dense as I’d like. I wish I could render everything as completely as Abandoned House #4. I’m happy with it, though. I’m having the comedown of finishing a huge project, where I promise myself never to make huge painting x (Gawaine, Trains/Dragons, Jess and Eric’s House, Mcdonald’s World) again. I hope that this painting feels interesting, and isn’t just and intellectual exercise. Really, it needs to feel interesting- it’s not like this is some sort of Borgesian thought puzzle or anything. I hope you all like it!